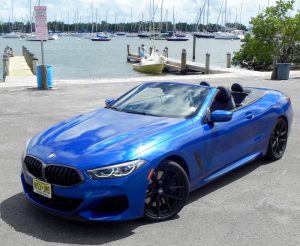 “Bigger is better” is pretty much engrained in our DNA as Americans, but apparently it isn’t necessarily so for our European cousins, particularly those of Teutonic stock.

Evidence for this comes courtesy of BMW.

The German automaker of fine luxury vehicles launches its first 8-Series droptop with the 2019 M850i xDrive Convertible essentially taking over from the 6-Series convertibles, which have been discontinued for 2019.

You might think that with the “8” leading off the alphanumeric designation that the M850i would the largest car (convertible, coupe, sedan) in BMW’s fleet of luxury vehicles, but you would be wrong.

But when it comes to luxury and driving experience, the M850i xDrive Convertible does’t sell anybody short.

The styling is bolder starting with the slightly larger, familiar kidney-shaped grille and imposing air intakes up front and continuing to the sculpted LED taillight clusters in the rear.

You’ll even find plenty of room in the center console’s storage compartment, and BMW even thoughtfully installed two cupholders under the center stack that can be closed off for a cleaner look for the dash.

The gear selector has the appearance of fine-grade crystal, though why designers thought it necessary to place the button for “park” down on the gear lever itself is a mystery to me. Why not leave it in the regular gear sequence? Drive, Neutral, Reverse, Park seems to work just fine.

Operation of the top is accomplished by tugging on a small lever on the console. The fabric roof raises and lowers in 15 seconds and at speeds up to 30 mph, handy if a sudden shower hits (not uncommon in my South Florida environs). When closed, the cabin remains very quiet. 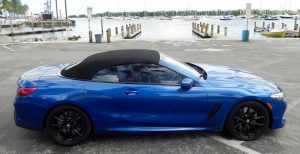 Technological and other functions can be operated by an iDrive controller, voice commands, or gesture control, and the large touchscreen at the top of the center stack does provide vital information at a quick glance.

Mated to an 8-speed automatic transmission (yes, of course there are paddle shifters for manual gear selection), it moves the M850i’s 4,736 pounds from zero to 60 mph in 3.8 seconds, according to BMW clockers.

You can select driving modes that include Comfort, Sport, Sport-Plus, and Eco Pro or set the mode to suit to your own individual tastes. (One of these days I’ve got to see what Eco is all about.) 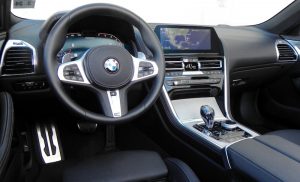 As you might suspect, fuel mileage is not a strongpoint for the M850i. EPA figures are 17 miles-per-gallon city, 26 highway, with a combined 20 mpg of recommended premium fuel.

Speaking of premium, the M850i xDrive Convertible also comes with a premium price with a starting MSRP of $122,395 including the $995 destination and delivery charge.

The most expensive option on my test car was a $1,700 Drivers Assistance Pro Package which features BMW’s Extended Traffic Jam Assistant that monitors surrounding situations to warn of potential hazards.

That package and a few extras that included a neck warmer (for driving with the top down in cooler weather) ran the final total to $123,395. 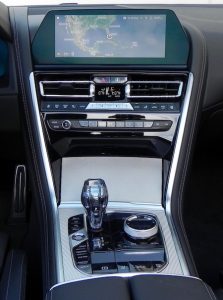 What I liked about the 2019 BMW M850i xDrive Convertible: The interior is impeccable, as one might expect (demand?) of a vehicle running into six figures. The ride is comfortable and smooth without being “floaty.” The ability to raise and lower the soft top while at speeds of up to 30 mph is a real plus. The trunk is small, but the backseats may be folded individually for more cargo capacity. Oh. And you can turn off the “stop/start” system by pushing a button on the console.

What I didn’t like about the 2019 BMW M850i xDrive Convertible: The abundant technological features can be fussy to operate as well as being a destraction from the driver’s attention, which is kind of ironic for a company that calls its products the “ultimate driving machine.” The backseat is tight, though not as cramped as some other four-passenger convertibles on the market today. You get back there by gently pulling on straps on the back of the front seats and the seats are automatically move forward.

Would I buy the 2019 BMW M850i xDrive Convertible? We’re assuming I have won the lottery here, so yes, I would put this magnificent vehicle in my collection if that were the case. That said, you can get a lot of luxury and technology from some competing vehicles and still stay well under the $100,000 mark.