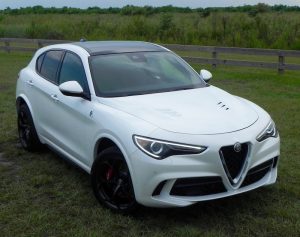 Considering that Alfa Romeo races in Formula and is known for producing nifty little roadsters like the 4C Spider it brought to the U.S. just a few years ago, it is not surprising that the Italian automaker’s first venture into the SUV/crossover world would come down heavy on power and performance.

Depending on what’s under the hood, the 2019 Alfa Romeo Stelvio matches the performance of many of today’s sports sedans or can take on a high-performance sports car in a straight-line drag race.

With the turbocharged 2.0-liter 4-cylinder in the base and Ti models, the Stelvio zips from zero-to-60 mph in 5.4 seconds, according to company timers. That isn’t bad for vehicle of this heft, but it would be left in the dust going against the Stelvio Quadifoglio and its twin-turbo V6. 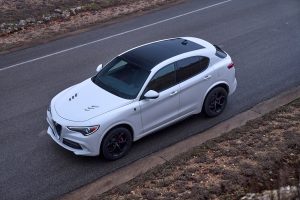 How about numbers of 505 horsepower and 443 pound-feet of torque and a zero-to-60 clocking of 3.2 seconds? That’s nearly a second quicker than that for the company’s 4C Spider that weighs in at 2,500 pounds or nearly 2,000 pounds less than the Stelvio Quadrifoglio.

The company boasts that the Stelvio Quadfoglio turned in a record 7 minutes 51.7 seconds on the Nürburgring, the best time ever posted by a production SUV on the famed circuit, making it the fastest production SUV in the world.

Both the 4-banger and the V6 are mated to an engine-specific 8-speed automatic transmission that features Sport, Natural and Advanced Efficiency modes with the Quadrifoglio model also getting the option of “Race” for even more enhanced performance. 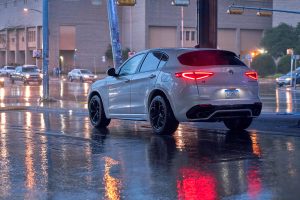 You set those modes via the “DNA” button on the console. The dial is marked “d, n, and a” and the image on the screen shows red for Dynamic mode, blue for Natural, and, of course, green for eco. It is yellow for Race, perhaps denoting the caution you should take when using that setting. You push the center of that DNA dial to adjust the suspension.

Quadrifoglio is the tag that Alfa Romeo assigns to its high performance models, similar to the BMW’s “M” and Mercedes’ “AMG” designations. Quadfoglio is Italian for a four-leaf clover, which explains the cloverleaf logo near the Stelvio Quadrifoglio’s front fenders. The cloverleaf’s link to Alfa Romeo dates back to Alfa Romeo’s early racing efforts in the 1920s.

The Stelvio Quadrifoglio also comes with all-wheel drive as standard, which is denoted by a Q4 on the left of the rear power liftgate.

In addition to all that power and performance, the Stelvo Quadrifoglio also features distinctive Italian styling. That can be polarizing, of course, as the risk that goes along with stepping away from the crowd can also put off some potential customers.

But it works in this case. The Selvio Quadrifoglio is not just for those who “think outside the box” but for those who don’t acknowledge that a box even exists.

Introduced for the 2018 model year, the Stelvio Quadrifoglio gets some specific styling touches with dashes of carbon fiber throughout, including a carbon-fiber drive shaft. Still, the interior could use a bit of sprucing up in comparison to some of its competitors, and the red interior borders on garish to some.

For a price tag that starts at just over $80,000, the Quadrifoglio doesn’t separate itself much in interior quality from its lower priced stablemates Stelvio, Stelvio Sport, and Stelvio Ti that run in the $40K neighborhood. 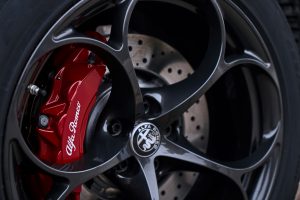 But there are plenty off features, including Apple CarPlay and Android Auto, premium Harman Kardon audio, 8-way power adjustable and heated front seats with 4-way lumbar support, navigation, leather dash and upper doors with accent stitching, bright aluminum pedals, and a leather-wrapped steering wheel that are included as standard before you have to venture into option packages that include lane-keeping assist, adaptive cruise control, and a dual-panel sunroof.

What I liked about the 2019 Alfa Romeo Stelvio Quadrifoglio AWD: The styling, both interior and exterior, is definitely distinctive. It is a joy to drive, and comfortable for occupants as well. I don’t use them that often, but mounting the paddle shifters on the steering column rather than the steering wheel itself makes for easier shifting. 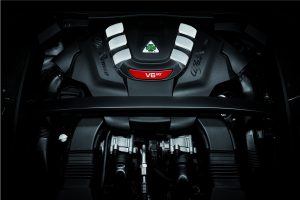 What I didn’t like about the 2019 Alfa Romeo Stelvio Quadrifoglio AWD: The display for the rearview camera is on the small side, which can become critical in bright, sunny conditions. Operation of infotainment functions is somewhat fussy. You need to take care entering the vehicle, especially from the driver’s side, or you’ll bump your head. Harnessing all that horsepower can be an issue if you’re not on full alert. The vehicle often takes bit of a leap at the slightest touch of the accelerator pedal when dynamic mode is set.

Would I buy the 2019 Alfa Romeo Stelvio Quadrifoglio AWD? Yes. If you’re looking for a high performance crossover/SUV, this has to be on your list.

*Photos furnished by FCA and the author