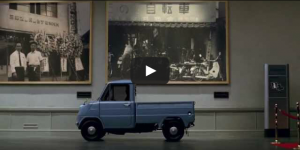 Like Toyota, Honda is celebrating a milestone year — 2013 marks half a century of automobile production (it started building motorcycles a bit earlier).

During those 50 years, Honda has built some pretty darn cool vehicles. While the likes of the S2000 and the CR-X did make it to the United States, others — like the Motocompo-equipped City Turbo II and innumerable kei cars — never arrived on our shores.

This video retrospective, which we spotted at Japanese Nostaglic Car, gives us a quick look at some of the vehicles Honda deems important. You’ll see the T360 (the automaker’s first automobile), the Civic and the CR-Z. Anybody drive one of these venerable machines decades ago?

It’s in Japanese so naturally we have no idea what the hell they’re saying, but the visuals make it an enjoyable (if brief) sprint through Honda nonetheless. And who knows? Maybe we’ll get a car as quirky as the N-One here, eventually.